Inspiration can come from anywhere. This time from a movie I saved on PVR … 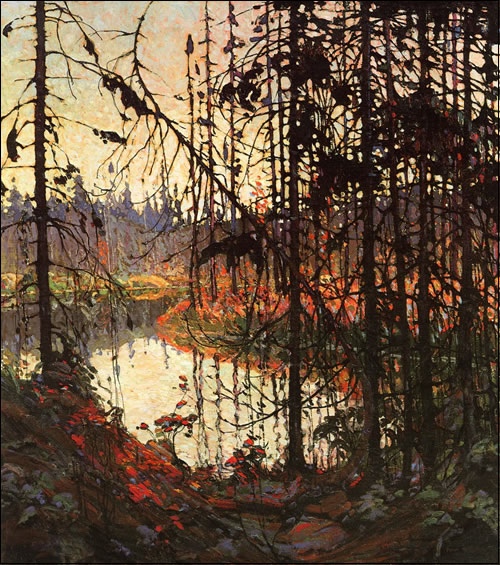 The movie is called ‘The West Wind‘. It’s the life story of Canadian artist Tom Thomson, who died under curious circumstances on Canoe Lake in Algonquin Park. The movie however, tried to unveil the tale of his life, rather than the romantic mystery of his passing.

He was a man driven by his passion – to paint. For a time he had a very promising career as a graphic designer that took him to Seattle and back to Toronto, where he lived most of his days. But he ultimately gave it all up to pursue his own art and his love of capturing timeless moments in Algonquin Park. Even odd jobs he took on wouldn’t last as he never had enough time to paint. In the end, Thomson started spending more and more time in the north, really embracing his true calling.

He drew countless sketches, painted small works and larger masterpieces. That’s what he did, every day – paint. He sold a few during his lifetime and began making a small name for himself, but nothing like the legend he is today.

His death at the age of 39 is a huge part of his legacy for sure. How he died, which is explored in the movie, is still a mystery. His story is mythical, and us Canadians have nurtured his life into a great national tale. But in the end, he was just a man living his life. A life he pursued on his terms, deciding how to live it and how to create it for himself.

I’m glad I recorded that movie (in fact I haven’t erased it …), as it can serve as a great reminder.

Now I just have to watch everything else I’ve saved (Scott Pilgrim vs. The World, The Departed, The Twilight Zone TV shows …).

PS — I don’t know if you’ve ever had the chance to see Tom Thomson paintings in person, but it is a surreal experience. The Jack Pine, The West Wind, Northern River (the painting I posted here) are insanely amazing. The guy was crazy talented. Here’s a link to the TT gallery in Owen Sound: http://www.tomthomson.org/

4 thoughts on “The Painter”